Building a Financial Landscape with Megacorps

Building a Financial Landscape with Mega-corporations

"I am convinced he (god) does not play dice." - Albert Einstein
"Not only does god play dice. He is using loaded dice." - John Ford
"God not only plays dice, he sometimes throws the dice where they cannot be seen." - Stephen Hawking

When building a new setting, a lot of it can seem random, and sometimes it is. Personally, I like to take the random bits and apply some organization to them. The human brain is a pattern-seeking engine, and your players will recognize patterns in your world. Those patterns will lead to expectations. If you have already molded the chaos of your world building into patterns yourself, you will be better prepared to direct those player expectations. Not only that, but you will see patterns yourself as you continue to build, which you can use to fill in details that will feel like logical growths in the details you have already established.

One of my favorite tools to do that with is Keith J Davies' Polyhedral Pantheons. Very simply put, it is a system for organizing a series of attributes into organized groups without too much overlap or conflict, and establish relationships between each organized group of attributes. And one of the benefits of it's organizational methods is that it also lends very, very well to creating lists for rolling random results as well. I'll let you check out his own material to learn how it works. Originally, he designed it to help the prospective world builder design and arrange the domains for an entire pantheon in a setting. It's probably the most efficient tool I have ever seen for doing that. However, I have found that it works pretty well with nearly any set of attributes you need to divide between entities. And since entities can be anything from an individual to a organization or kingdom, I have made extensive use of it in my own world building.

My most recent use of it has been to develop a system of Mega-corporations and the markets they work in in a Starfinder setting that they have a great deal of influence over. They are essentially the ruling bodies. How they interact with the various markets in the setting can have direct effect on the players. In this setting, which I have yet to name, the ever-shifting tides of power and influence between the competing mega-corps can seem random from the player's perspective, and to some degree it is. I wanted some structure to the process however.

My first step was of course to come up with the list of attributes to describe my mega-corps. I realized relatively early on that as mega-corps every one of them will have fingers in basically every part of the economy. But each would have a core attributes that would inform their relationship with the other areas of the economy. Further, specific local branches would have might have other specific focuses that don't necessarily match the parent corp's core attributes. And it would be the relationship between the parent corp's values with the local branch's values, in the context of the values of the market that local branch was operating in that would begin to show the complex interweave of economic relationships. And the polyhedral system would do most of the work of building those patterns for me.

To start with I decided I would use the d12 and d20 polyhedral charts from Keith's system. If you look into his material you find that they are complementary. This would also mean that the eventual random charts I would create would have the user roll a d12 and a d20. Here are the two lists of attributes I arrived at:

Now, if you are as observant as Keith was (I talk to him about a lot of the ideas I use his tools on), you'll almost immediately note that there could be some overlap on a lot of those categories. Food could be rolled into agriculture and hydroponics for example. This is by design. Remember that this is to inform you of relationships. SO if you get a result that have both "food" and "agriculture and hydroponics" rather than thinking "how are these the same" you can also consider "why are these noted separately for this corp?" For example, it maybe that the corp both grows the food and processes it into prepared foodstuffs, like ready-to-eat meals. Or another example "black ops" and "I could tell you but I'd have to kill you" both sound like basically the same thing, but you could have black ops and then really, really black ops when you get both attributes; and you could even have an organization that's not doing black ops at all but remains so secretive that they kill to preserve their secret.

There is no wrong answer, since the purpose is to use the pattern to inspire the relationships you are creating for your world.

The next step is to group these attributes into the core values of my corporations. I'm not gonna get into the details of how that grouping works, you can check out Keith's material for that. Basically, the two lists above will combine into the core attributes of 32 distinct entities, with the first item in each one being their primary focus, and the rest are the secondary ones.

I'll jump right to those results:

This is just an initial list, and by no means final. Keith has suggested several improvements, like adding positive and negative attitudes to the lists of attributes, to reflect each corp's attitude towards those attributes. But it does give you an idea of how this tool can organize your world building. At this point I can just look at one of those groups of attributes and the corporation they suggest starts building itself in my mind.

And that is the ideal, the golden standard of world building: for it to be writing itself as you go. If it unfolds for you, then the only thing you have to do is record it. The patterns are already there, the connections between them drawn.

So the next step is to get the attributes for the various markets. That's pretty easy to do: I just randomly re-order the lists above and go through the same process using the same attributes. This gives me the various regions and the things people are most interested in, in those regions.

Lastly, I create the local branch for a corp. That's even easier. I roll a d20 and a d12 and use those attributes as the focus of that local branch. You now have the things the mega-corp thinks are most important, the things the market values, and the purpose of the local branch. You can tell what kind of support he parent corp is giving the branch, what the local branch does for that parent, and how both of those relate to the local market. That's a LOT of information to get just from filling out a few lists of attributes and letting a spreadsheet organize them for me. And you can extrapolate even more.

I can roll a d20 and a d12 and consult the chart I used for the markets to see where forces are shifting in the local mark that day. Then when the PCs go visit that branch you might extrapolate from those market forces how their point of contact is doing, because you know what is stressing them that day. In fact, they might just want the players to go do something about those stresses. Or it might be a great day for them, and they are offering a bargain to the players.

As I said before, it's all about what the patterns inspire you to do. And this tool helps you form patterns like no other. And the best things is, Keith seems to love talking to people about this tool, and he can make it figuratively sing with results and new ways to use it.

Another time I'll tell you all about the setting I am working on, and the financial systems I am developing for it.

Until then, go out there and play god with your world building: use dice and make them loaded. 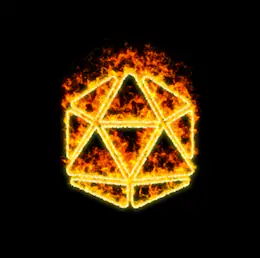 Phil Forbes
I'm just a random gamer that wanted a place to share my thoughts, and keep them organized. I've worked in a variety of fields throughout my life, finally found a career in technical writing... which I am in the process of learning.